It’s a common practice to give Valentine’s Day cards to your loved ones on February 14. These items of printed ephemera are often embellished with glitter, hearts, and sappy love notes. To convey our feelings of deep appreciation and admiration for our friends and family, as tradition goes, we begin to pass them out. But whether they are home-made or store-bought, their purpose is to let our close acquaintances and loved ones know of our love and gratitude.

Valentine’s Day comes from the Roman festival of Lupercalia, which happened in the middle of February. This festival was in celebration of the coming of spring. According to the Encyclopaedia Britannica, the name Valentine may have come from a priest who was martyred about 270 CE. There is a legend that Priest Valentine sent a letter to his jailer’s daughter and signed “from your Valentine”. Other sources say that Valentine’s Day is named after St. Valentine, a bishop of Terni, but it could be that they are the same person.

Although there may be different beliefs and legends of who Valentine’s Day is named after, there is one thing that holds true – love. We celebrate love and romance this day with cards and many other gifts. In fact, the tradition of Valentine’s Day cards dates back centuries!

In a book called The Romance of Greeting Cards by Ernest Dudley Chase, he mentions that the tradition of making handcrafted Valentine’s Day cards dates back to 1667. It wasn’t until the early nineteenth century in England that Valentine’s cards were produced as commercial retail (Terrell, Ellen, “Commercialization of Valentine’s Day”, February, 12, 2016, Retrieved from https://blogs.loc.gov/inside_adams/2016/02/commercialization-of-valentines-day/).

Have you wondered what the oldest Valentine card looked like? Actually, it wasn’t a card, but a letter! The oldest surviving Valentine message was a written poem by Charles, Duke of Orléans in 1415. Sir Charles wrote this poem to his wife while he was held a prisoner in a tower in London. Here is an excerpt:

I am already sick of love

Although Sir Charles’ love letter seems to be a bit depressing we can’t blame him when he was kept in prison for 25 years!

According to The British Library,

“The letter comes from one of the largest collections of 15th-century English private correspondence, known as the Paston letters. The collection offers a unique glimpse into the personal lives of the Paston family from Norfolk – the family name comes from a Norfolk village about twenty miles north of Norwich. The Pastons had risen from peasantry to aristocracy in just a few generations: the first member of the family about whom anything is known was Clement Paston (d. 1419), a peasant, who gave an excellent education to his son William, enabling him to study law. John and Margery’s son, William, would become a prominent figure at the court of King Henry VIII.”

This letter is now in possession of the British Library. Take a look! 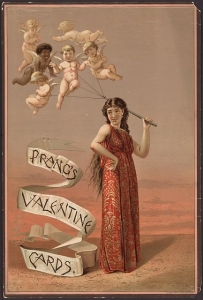 Valentine’s Day in the Twenty-first Century

We’re not living in the twenty-first century and we continue to pass out Valentine’s Day cards! According to the Greeting Card Association, Americans are expected to spend $1 billion on cards! (Andreano and Shapiro, February 14, 2017, “Valentine’s Day by the numbers: See how much money is spent on flowers, candy, and cards” Retrieved from https://abcnews.go.com/Lifestyle/valentines-day-numbers-money-spent-flowers-candy-cards/story?id=45480956)

With that being said, today Valentine’s Day includes more than the exchanging of cards! In fact, in 2017, ABC News said,

“Total spending for the holiday is expected to top $18.2 billion, according to the National Retail Federation. That’s an average of $136.57 per person.”

Can you believe that?! This isn’t just on cards! We go above and beyond the home-made cards. We gift our Valentines jewelry, chocolates, candies, expensive dinners, flowers, and it doesn’t stop there! 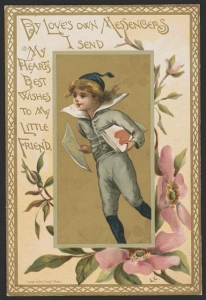 Image from Library of Congress, 1883

Now that you know the history and importance of Valentine’s Day, you might be interested in collecting these specific holiday ephemera! If you’re not sure where you could find vintage Valentine’s Day cards, you might find Searching High and Low for Ephemera helpful. Maybe you’re still not convinced? If this is the case, read 6 Reasons Why You Should Collect Ephemera. You might find a new hobby!

About the Author: JaRee Smith

We are passionate about our ephemera. We love the look and feel of vintage papers and collectibles. We hope to share our passion and knowledge with those who also love ephemera. Whether you are new to the world of ephemera, or a seasoned collector we hope you find something you enjoy.